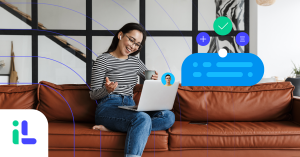 Microsoft has a new partner in Europe, and Microsoft Teams has a new internal app with a unique feature – isLucid is the digital assistant for conference calls that turns voice to text to tasks in project management systems Jira, Azure DevOps and others.

Lucid Agreements, a company based in Norther Europe that created this assistant, is deepening its partnership and integration with the US giant’s communication platform. The startup became the first Microsoft partner to migrate its billing system from Stripe directly to Microsoft Commerce platform and MS Teams.

This means that isLucid subscription can now be paid for by a single account, together with a payment for Microsoft product licenses.

As mentioned, isLucid, after adding the app to a conference call in the MS Teams environment, can transcribe conversations in real-time, detects potential tasks and allows the user to immediately add verbally agreed tasks to project and task management systems such as Jira, Azure DevOps, and other.

“We are solving the problem of forgotten tasks and unmanaged expectations, when the plans or ideas expressed orally during the meeting are not recorded or noted,” says Vytenis Pakenas, CEO and Co-Founder of Lucid Agreements.

According to him, IsLucid is a first native app in its category on MS Teams ecosystem. Currently neither on MS Teams nor on other remote meeting platforms like Zoom or Slack there are analogous solutions that cover the full cycle from verbal to written into task management systems like Atlassian Jira or MS Planner and more in real-time.

Though there are meeting assistants with voice recording and analytical functions. But they are not integrated into calls and do not work in real time – analysis and other actions can be done after the meeting.

Deeper into the corporate rabbit hole

“We aim to save time that is usually needed for task management and provide the opportunity to capture more details that can affect the quality of project implementation and provide additional opportunities for sales,” says the entrepreneur.

He counts that after a meeting, that takes about an hour, participants usually need at least an additional 15min to compile follow-ups and assign tasks. On average, one manager has about 12 meetings a week. It translates to at least 156 hours a year or around one month of full time job just for creating and managing tasks that were raised during the meeting.

“Caring for our customers who need to try out product first before going all in, and understanding the hectic purchasing procedure for majority of the SaaS offerings we notice an opportunity Microsoft brings. An opportunity to bring SaaS experience assisted with MS corporate knowledge and being under the same budget line as majority well known Microsoft products are” explains V. Pakenas.

In comparison, the typical process of incorporating new tools into the daily life of a company is much more complicated: usually an employee or a team finds what is needed and tests the solution. If it fits, it’s often necessary to write requests for additional funds for these new tools. Also, very often managers answer is to mind the IT budget and tighten the belts if needed.

“The Microsoft ecosystem makes life easier for businesses. Being in this ecosystem and deep integration allows both us and our customers to focus on work and products, as the ecosystem itself removes barriers and provides tools for efficient development and sales,” says the founder of Lucid Agreements.

One might say that Lucid Agreements is a COVID-19 baby.

“We started in 2019, when I sold my previous business – IT services company. The experience gained there and in multiple other businesses with IT and managerial roles showed me that many oral tasks, arrangements or details are lost after meetings. This lesson became the foundation of a new business – this is how isLucid came about,” says V. Pakenas.

He tells the story of turbulent beginnings. First, V. Pakenas and several like-minded people planned to create an app for work instructions so that everyone in the company at any point in time knew who is responsible for what. However, after consulting with investors (Katalista Ventures) and testing the proof of concept, it was decided to turn it into a contract app. It was supposed to be a solution for people who handle a lot of things over the phone – a kind of precaution that proves what both sides agreed to.

“We made a version that we all liked, contacted, and befriended Google’s team supporting Android applications. People from the U.S. giant’s head office even helped us redesign the app. Soon after COVID-19 struck. The world suddenly stopped, and we saw a significant drop in usage. We could have either waited for the pandemic to pass – we probably would have waited until now – or come up with a solution to apply it to remote work,” says V. Pakenas.

The solution presented itself in a form of Microsoft API.

“Back in 2019, a bit before the pandemic we were analyzing, which way to move next and got the news that Microsoft is opening audio stream from MS Teams to external solution providers like us. It was early beta APIs we used in 2020 march to access the audio stream. I then realized that all the goodness will not come from contracts or recordings that are waved when things are already bad, but from the ability to capture actionable items – elements of the conversation – and turn them into tasks,” says the CEO.

After pivoting and confirming feasibility of a new product founder together with the VC that previously invested in Lucid Agreements and a first angel investors gathered all the needed capital to build MVP.

“We were among the first in the world to benefit from the Microsoft audio stream API. We even got through to Redmond (Microsoft headquarters) and they saw that we were taking this seriously. We’ve got a lot of support from Microsoft. And when we became a partner, we learned that soon MS Teams would have a place for apps in the same window where we see people. As a result, we postponed the launch of the product until the conference,” the entrepreneur recalls.

The company is backed by Coinvest Capital together with Angels from LitBan, Katalista Ventures and Startup Wise Guys with a recently closed round of $400k.

Now, according to V. Pakenas, the company focuses on advancing its meeting assistant by making it more human, as well as privacy, and data security. For example, it offers identification with MS account and security solutions.

“We want the customer to use IsLucid to improve their and others’ experiences in the MS Teams ecosystem without giving away any sensitive data. Our artificial intelligence learns from the live voice-first conversation and does not store any audio information. Transcribed text is stored on our servers, but customer data is separated and isolated, everyone has their own database,” says the head of Lucid Agreements.

As for the future, encryption with the client key and other improvements are coming. This, for example, means that if there was an angry IT administrator who wants to see what you have been talking about with a client or a colleague, he will not be able to do so without a proper access rights and consent.

Setting up and Registration of the isLucid application

This website uses cookies to improve your experience while you navigate through the website. Out of these, the cookies that are categorized as necessary are stored on your browser as they are essential for the working of basic functionalities of the website. We also use third-party cookies that help us analyze and understand how you use this website. These cookies will be stored in your browser only with your consent. You also have the option to opt-out of these cookies. But opting out of some of these cookies may affect your browsing experience.
Necessary Always Enabled
Necessary cookies are absolutely essential for the website to function properly. This category only includes cookies that ensures basic functionalities and security features of the website. These cookies do not store any personal information.
Non-necessary
Any cookies that may not be particularly necessary for the website to function and is used specifically to collect user personal data via analytics, ads, other embedded contents are termed as non-necessary cookies. It is mandatory to procure user consent prior to running these cookies on your website.
SAVE & ACCEPT