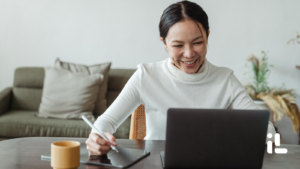 Miscommunication is a common challenge during online meetings, whether it emerges from some technical glitches or software issues. However, sometimes the non–verbal behavior raises even more challenges as it takes the largest percent (55 %) of the whole meaning of the message that we send out during discussion (tone contains 38% of meaning and words — only 5%).

In contrast to in-person meetings, where body language, tone of voice, pace and movements contribute to words, virtual meetings are limited to audio and visual cues. Equally, it is more implicit – unintentional face expression or posture.  As it is such an important principle of sending a strong message during meetings, we will provide you with some recommendations on how to improve your online non-verbal communication.

Engaged eye contact is required in communication and is especially important on video meetings. Although, it may be easy to slip away when speaking via a screen (or spend majority of the meeting looking at yourself)— maintaining eye contact with others show that you’re involved and interested in what they’re saying — and vice versa. Therefore, stay zeroed in on your listeners and look directly into the camera to create an illusion of real eye contact. At first it may be difficult, but after some practice you should handle it in no time.

Just as you would in person, smiling and nodding along while others are speaking will let them know that you’re listening and engaged. Tilting your head to the side will also affirm your interest on matter.

There are some posture signals that shows how centered people are in conversation. As people attend online meetings while sitting in front of a camera – a confident upright position with square relaxed shoulders is recommended to portray professionalism and confidence. A slight leaning in towards the screen indicates active listening and interest in the topic. On the contrary, when someone’s shoulders are tense they might are uncomfortable or frustrated.

The distance from the camera should also be considered, because there should be space for some hand gestures and overall visual of appearance – from elbows to head.

Hand gestures when speaking really help you speak more effectively, as it adds value to what is being said. So, try to gesture naturally, and your message will have a stronger meaning.

You should avoid touching your hair, face or forehead, or holding the hands in front of the mouth while you speak, because it is distracting the audience, and you appear rather nervous and cautious than confident on the call. You should not lean on your head on the hand as well, because this would signify boredom and tiredness.

Maintain open arms, because folded arms can convey defensiveness and reticence. Especially when people tend to put elbows on the table and fold hands in front of the face. This gesture creates a huge barrier between speaker and audience. On the other hand, chin scratching or holding, sometimes indicate that person is thinking and contemplating information, but overall, it often means that the person is lying or is uncertain.

So, as actions really speak louder than words, people really should sit and overthink their body language. Enhancing nonverbal communication both during real and online meetings will elevate them and portray professionalism. Thus, you will become more aware of not only other’s body language and nonverbal cues, but also your own.  As a result, becoming a better team member!

Setting up and Registration of the isLucid application

By clicking subscribe, you are consenting to allow Lucid to store and process your personal information to provide you the service requested

This website uses cookies to improve your experience while you navigate through the website. Out of these, the cookies that are categorized as necessary are stored on your browser as they are essential for the working of basic functionalities of the website. We also use third-party cookies that help us analyze and understand how you use this website. These cookies will be stored in your browser only with your consent. You also have the option to opt-out of these cookies. But opting out of some of these cookies may affect your browsing experience.
Necessary Always Enabled
Necessary cookies are absolutely essential for the website to function properly. This category only includes cookies that ensures basic functionalities and security features of the website. These cookies do not store any personal information.
Non-necessary
Any cookies that may not be particularly necessary for the website to function and is used specifically to collect user personal data via analytics, ads, other embedded contents are termed as non-necessary cookies. It is mandatory to procure user consent prior to running these cookies on your website.
SAVE & ACCEPT